A Runners Injury and His Confusion Between Sports Rehabilitation, Sports Therapist, Chiropractor, Sports Physio and Physiotherapist.

This month we take a look at how local Nuneaton runner Kelvin was treated at the Queens Road Sports Injury Clinic. Kelvin based in Nuneaton started his journey back to physical activity after a long time off through time commitments. After trying playing sports such as football, rugby and cricket with various sports teams and clubs in Nuneaton Kelvin found his enjoyment from running. After suffering a major injury Kelvin states his story about his journey into activity and the confusion between Sports Rehabilitation, Sports Therapist, Sports Physio, Physiotherapy and Chiropractor and the choices he made.

Kelvin started running with local Nuneaton running clubs and attended the famous Bedworth Park Run along side the Coventry Park Run. Having established a running pattern and form Kelvin decided he would venture out and try a organised run in this case the Two Castles 10km Race.

It was during one of his runs 7 weeks away from his big debut run at a local running event in Nuneaton and Bedworth when Kelvin first felt pain in his knee. At this point he carried on hoping it would ease off however this wasn’t the case. The next day Kelvin woke up to extreme pain to his knee and he was not able to weight bare let alone walk or run. Concerned he set out to seek help as the deadline for fitness was looming in the background.

So Whats the verdict Kelvin?

After finding Queens Road Sports Injury Clinic Kelvin says “I was extremely pleased I wasn’t sure if i needed a sports therapist,  sports rehabilitator, sports physio, physiotherapist, or chiropractor. In the end i decided to make logical choice and go for whats in the title and chose a sports based therapist who also specialised in sports injury rehabilitation hence my choice to go to the Queens Road Sports Injury Clinic in Nuneaton. They diagnosed me with knee ligament damage and set about using soft tissue injury treatment as well as sports injury rehabilitation to get me back to full fitness. I was fit 3 weeks after i started treatment and completed my goal to achieve the completion of a organised run. I would like to thank Ash and the team at Queens Road Sports Injury Clinic and i would highly recommend them”. 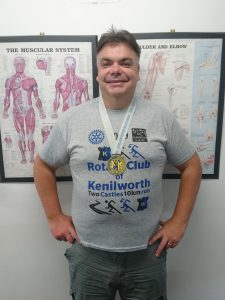 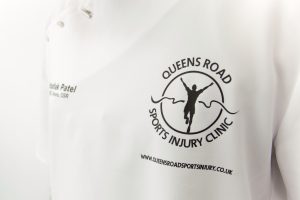 This blog in no way indicates or markets we offer any services other than the roles of a Sports Rehabilitator.

Check out our recent news.

Too book a session simply fill out the form below and leave a deposit and we will email you with confirmation within 48 hours.

Request a call back

Too busy to give us a ring? Simply leave us a few details and we will ring you back at your convenience.

What our clients say

"Playing rugby at a high standard means I must stay fit and injury free. Although i wasn't injured at the time I payed a visit to the Queens Road Sports Injury Clinic after having been told by a freind the indepth injury prevention work they offer. It was clear to see that the treatment team were very experienced and were used to working with high caliber sports personel as the asssesment and biomechanical analyses was exceptional. I was told about the injuries that i could be more at risk of gettign and had a strict well supported rehabillition programme to follow. After just a few sessions i can honestly say i feel a big difference in my balance and equal muscular strength. Even though I am at the later stages of my career feel it is a great service to stay injury free and would realy benefit any youngsters who are keen to play their relative sports at the highest level. A big thankyou to the team at the Queens Road Sports Injury Clinic keep the great work up, highly recomended.”

"I can honestly say that I can feel a marked improvement in my right shoulder. It now feels more relaxed and less tense than it has for many years. Playing cricket at a high standard put a lot of stress on the body. The injury treatment and prevention work I received was brilliant Thank You Ash”

"I had never heard of Queens Rd Sports Injury Clinic but after suffering with back aches I thought I would give it a go. I am really pleased at the results your treatment has given me. I can't believe it only took two treatments to make a huge difference. If only I had known about the clinic before."

"Having suffered from spinal joint pain for years and tried many other therapists and treatments with no success I was told by a friend to visit Ash the specialist at the Queens Rd Sports Injury Clinic. Although my injury had nothing to do with sport it was explained to me that this did not matter. The expertise Ash has in this field is second to none and the results are amazing. He is a great guy and offers a service of high quality I would definitely recommend him to anyone".

“I have played rugby at a semi-professional and professional level for much of my career. During this time i have had a lot of injuries which stopped my playing career and doing certain activities on a daily bases. The work Ash has done has been awesome not only has he made my daily living easier i am now back playing rugby at a recreational standard. The knowledge he has about the human body is outstanding and his support with the rehabilitation programme throughout my treatment was excellent. I wasn't surprised to find out about his great achievements and the fact he has worked with some of the best athletes in the country".

"After giving birth to my son I suffered from severe lower back and hip pain. Having had a consultation i was put through a detailed analyses which found muscle and biomechanical imbalances. The treatment I received and rehabilitation programme I followed allowed me to get back to day to day living. Visiting the Queens Road Sports Injury Clinic was by far the best choice I have ever made, highly recommended to anyone with any injury".

"My son suffered from a chronic knee condition which leads him not being able take part in any physical activity for over 8 months. It was very frustrating for me and my son with the problem not being solved and him not being able to play football or be a normal active teenager. After travelling near and far and having visited a lot of therapists I came across the Queens Road Sports Injury Clinic by chance. From the very first consultation I knew my son was in good hands. The assessments and analyses he was put through were extremely thorough and it was clear for me to see what the problem was and why after seeing other therapists it still was not fixed. Two months later after my son started the treatment, we was both back to playing sport and doing normal physical activities. It was not only the treatment I was happy with but the support my son received throughout his rehabilitation programme. I received information and advice when I needed it even outside clinic times. If you’re looking for goodservice, brilliant support and recovering treatment from an injury or discomfort pain then visiting the Queens Road Sports Injury Clinic is a must, their experienced team will not let you down".